You are here: Home / Manganese, a versatile mineral

Manganese is quite abundant in the earth’s crust, but it is not regularly distributed; more than 80% of all manganese deposits on earth are found in Ukraine and South Africa. The ocean floors are particularly rich with it but the extraction is very complex and this has caused to desist from exploiting this source. 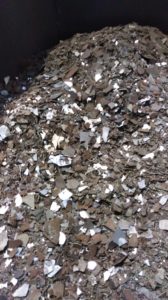 It is widely used in alloys with other elements. Manganese compounds are used in many fields: potassium permanganate (KMnO₄) is an oxidant used as a reagent in the laboratory, manganese dioxide or pyrolusite (MnO₂) is used for the discoloration of glass containing traces of iron and for the production industrial chlorine and oxygen and for paints.

Manganese is also a very important element in the biology of living beings: it is a cofactor of many enzymes that participate in numerous and fundamental cellular activities; participates in the synthesis of RNA, glycolysis, the citric acid cycle, the synthesis of phosphatidylglycerol and thymidyl nucleotides, the biosynthesis of fatty acids. Furthermore, Mn is an indispensable factor in manganese-dependent superoxide dismutase, an antioxidant enzyme for the neutralization of free radicals and for the functioning of the central and peripheral nervous system.

Manganese is therefore present in the body in very small quantities, about 20 mg, mainly accumulated in the kidneys, pancreas, liver and bones. The lack of manganese is rare as small quantities of this mineral are present in many foods of common use, but in the case of a serious deficiency the symptoms are infertility, pancreatic damage and cardiac dysfunction; in less severe cases, hypertension, muscle spasms, skeletal malformations, hypercholesterolemia, visual and hearing problems, severe memory loss and tremors.

On the other hand, an excessive intake of manganese can lead to parkinsonian symptoms, and interfere with the absorption of iron. Manganese poisoning is called manganism which can affect workers in the metallurgical industry who can suffer from lung and central nervous system injuries. In plants it is a cofactor of photosynthesis, in bacteria it intervenes in the fixation processes of ammonia, nitrogen and sulfur. Acid solutions of permanganate oxidize any organic material with which they come into contact: this reaction generates sufficient heat to ignite some organic substances.

Manganese is an indispensable component for the production of low-cost stainless steels, proof of this is that 85-90% of the manganese produced in the world is used in the steel industry. In fact, alloy steels have better chemical-physical characteristics and in particular the “Mn steel” (which contains manganese around 1.7%) has greater resistance to wear, greater hardness, self-hardens if subject to impact and sees its strength increased tensile strength (100N / mm² every 1%), it has a deoxidizing action, improves hardenability and facilitates the formation of carbides. By also increasing the penetration of the hardening thickness and decreasing its temperature, manganese steel is used for the production of large pieces.

Metallic manganese is mainly obtained electrolytically with stainless steel cathodes and lead anodes. Manganese with 99.94% purity accumulates on the cathode, which is then taken in flakes. In steel mills, therefore, electrolytic manganese is used for the production of alloy steels, but this must be used in the form of fine granulate. The mineral can be purchased from the electrolysis plant in flakes of about 50 mm by 2 mm thick and the pulverization on site, at the steel mill representing the last user, is economically convenient compared to the supply of the finished product ready for use. 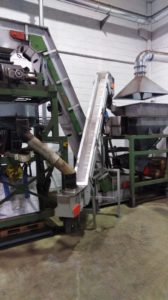 The plant supplied in the province of Brescia fulfills this task. Our supply includes: hopper for collecting flake material, vibrating extracting feeder, belt conveyor to feed mill, 490 type cylinder mill, vibrating screen and recycling belt conveyor. The loading hopper is filled with flakes from big-bags: these are conveyed to the cylinder mill via a conveyor belt and there granulated; a vibrating screen separates the particles of the desired size from the part that needs a further passage to the mill (oversize) which, through a recycling belt conveyor, returns to the initial storage hopper. The manganese that has reached the desired particle size is discharged by gravity.

The plant produces about 500 kg / h of granulate less than 1 mm.